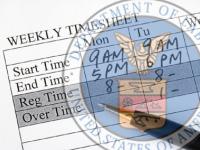 In a surprise move, a federal judge in Texas put a halt to the implementation of the new overtime regulations, scheduled to take effect December 1, 2016.

I for one, am pleased this took place.  While I recognize some employers take advantage of “exempt” employees having them work 50-60 hours a week for the same pay as though working  40 hours a week.  And for a handful of those employees, they would have become non-exempt, having to log their time and get paid time and one-half for over 40 hours in the workweek.

The unfortunate part of this legislation was that it would cripple many small business and non-profits who already struggle to compete with the larger employers for talent.  With the rising costs of benefits and. With this overtime rule, some businesses and non-profits were faced with closing their doors, having layoffs or taking individuals to part-time employment.

I believe there could have been a more reasonable approach for what the salary guideline was for being exempt, rather than more than doubling the weekly wage from $455 to $913. That is a huge jump for most companies.  Perhaps another attempt will be taken that the majority of businesses and non-profits could mutually agree upon.